Growing up in the early 2000s, the live-action Scooby-Doo movie was a regular Saturday night video rental in my house – 20 years since its release, the film evokes memories of the candy-coloured, celebrity-obsessed zeitgeist of the early noughties.

The film opens on a typical Scooby-Doo scene, with the spooky gang in an empty toy warehouse, cracking the case of the Lunar Ghost. Daphne is yet again captured by the villain, and Velma’s plan is shot to hell, but due to some crafty skateboarding through the factory line by Shaggy and Scooby, the Lunar Ghost is successfully de-masked, and once again Mystery Inc. has saved the day.

What should be yet another celebration (with a personal thank you from Pamela Anderson in a cameo role), brings long-simmering tensions to a head: Daphne is sick of being the one that gets kidnapped all the time, and Velma is over the fame-obsessed Fred always taking credit for her ideas. Despite Shaggy’s best efforts to implore that “best friends don’t quit,” the gang from Coolsville is splitsville. It’s not until two years later that the friends reunite, having all been invited to solve the mystery of zombie-like college students on Spooky Island, a theme park and spring break destination.

Even though the Scooby-Doo cartoons first aired in 1969, screenwriter James Gunn (now best known for his work on Marvel’s Guardians of the Galaxy and DC’s 2021 reboot of The Suicide Squad) and director Raja Gosnell work in a modern sensibility, transposing the heart and hijinks of the original series into the new millennium – most prevalent is a self-awareness that presents itself as ironic humour, and gives the cartoon’s grooviness a Y2K makeover.

Gunn’s script pokes fun at the cheesier parts of its source material, while also addressing what the original cartoons wouldn’t. Sexual innuendos are peppered in, and popular fan interpretations of Shaggy as a stoner are referenced by giving him a love interest named Mary Jane (played by Isla Fisher), an old-school euphemism for marijuana. One of my favourite lines comes from Velma, who comments while investigating a broken-down castle ride, “The only thing missing is a mindless zombie,” which directly precedes Fred’s entrance through a side door. It’s a joke that could have come straight from the cartoon, but in the contemporary context takes a subtle dig at the conflation of vanity with being an air-head.

By breaking up Mystery Inc. in the opening scene, the film gives the gang’s female members room to gain agency in a move typical of the Girl Power feminism that was popular through the 90s and early 2000s. It is significant that Velma speaks up for herself and demands respect, and Daphne – now a master at karate and self-defense – is no longer the damsel in distress. Portrayed by Gellar, who was already known to kick ass on screen as Buffy in Buffy the Vampire Slayer, it seems only natural that Daphne is also a force to be reckoned with. In the new Millenium, girls save themselves and look hot while doing it. 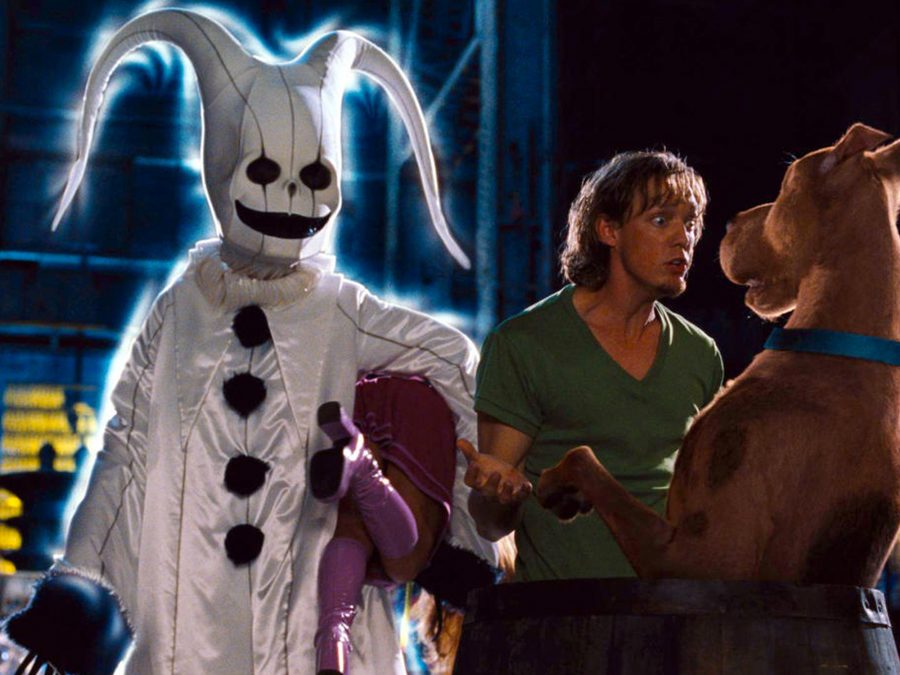 This kind of stunt-casting is present in the rest of the film. Nineties heartthrob Freddie Prinze Jr plays vain proto-himbo Fred – a natural leader, much like his homecoming king character Zack Siler in She’s All That (1999). Linda Cardellini entered the scene with her portrayal of the deadpan and smart outsider Lindsey Weir in the short-lived television series Freaks and Geeks (1999 – 2000), making her a natural choice to play the brainy Velma with such reverence. Most iconic of all, Matthew Lillard perfectly delivers the earnest scaredy-cat Shaggy’s catchphrase “Zoinks!”, that even though the film was critically panned, the critical consensus can’t help but praise Lillard’s performance as a standout. Best known for his role as horror-film obsessed Stu Macher in the self-referential meta-flick Scream (1996), the pivot from playing a scary-movie obsessed gleeful killer to a nervous wreck who vehemently does not “do” abandoned spooky castles, adds another layer of irony.

Featuring a brain-washing cult that targets college students, Scooby-Doo shares similarities with 2001’s Josie and the Pussy Cats, which also features the theme of socially-conditioned young people. This recurring plot point speaks to the rising fear of the hyper-media world of the new millennium. With young people as targeted consumers, there was an assumption that pop music, 24-hour television and movies were turning young people’s brains to mush. However, where Josie used pop music and consumerism to critique and condemn capitalist structures of media consumption, Scooby-Doo embraces it into the fold of its self-awareness.

The brain-washing training video Fred and Velma stumble upon seeks to train its victims in how to act like young adults by reminding them that “Today’s young people have a language all their own.” The language itself is over-the-top, and its ridiculousness is its own wink to media fear: “True dat! I’m up to sniznuff on all popular trends.” The band Sugar Ray even makes a cameo performance, revealed to be brainwashed monsters in disguise.

The early 2000s were a golden age for film and television targeted at teens, and by casting teen heartthrobs and franchise icons, Scooby-Doo plays directly into the mass-media culture of teen mags, tabloids and celebrity obsession with blatant self-awareness. Looking back, it’s a clear time capsule for a very specific time in pop culture history, which might explain its enduring popularity during the current 90s/00s renaissance.

Some of my earliest memories include a 3D holographic plastic cup featuring the Scooby gang that we got from Blockbuster during one of our many Saturday night trips, and as an Australian, no trip to Warner Brothers Movie World (a theme park in Queensland’s Gold Coast) was complete without going on the Scooby-Doo Spooky Coaster at least three times. Scooby-Doo was my first brush with the trans-media franchise-mania that has come to define 21st-century cinema. At the forefront is James Gunn himself, who continues to use this brand of referential humour, cheekiness, and nostalgia in his current slate of superhero-themed mega-blockbusters.

Spooky, kooky, and Y2K-groovy, this silly little movie about those darn meddling kids and their talking dog proves to have had a finger on the pulse of the zeitgeist the entire time – “you know what I mean?”

Little White Lies is committed to championing great movies and the talented people who make them.

By becoming a member you can support our independent journalism and receive exclusive essays, prints, monthly film recommendations and more.